The challenge of Alzheimer’s Disease

Alzheimer’s disease (AD) is the most frequent form of dementia, and is a progressive, degenerative brain disease that is characterized by cognitive and functional decline. An age-related disease, AD has major social, economic and health-care impact; various studies have shown a prevalence of 2% in the 65-69 year-old bracket, rising to 40% in the 90-94 year-old group. In the United States, more than 6 million live with Alzheimer’s disease, and by 2050 the number is expected to rise to 13 million. It is estimated the healthcare costs in 2022 due to AD is $321 Billion.

One in three seniors dies with Alzheimer’s or another form of dementia, and the disease kills more than breast cancer and prostate cancer combined. While a therapy was approved for Alzheimer’s in 2021 (aducanumab, known as Aduhelm from the pharmaceutical company Biogen), it was not without some controversy regarding its effectiveness. The US Center for Medicare and Medicaid Services (CMS) in the spring of 2022 arrived at a National Coverage Determination (NCD) to limit reimbursement. A few weeks later, Biogen’s CEO resigned and cut the company’s entire commercial infrastructure around the drug.

Alzheimer’s Disease is an incurable condition that progresses for 8 to 10 years before it is detected, and current methods of diagnosis depend primarily on imaging (CT and MRI scans), and sampling cerebrospinal fluid. In the spring of 2022, a commercial test for the two proteins beta-amyloid 1-42 and beta-amyloid 1-40 from CSF was the first in-vitro diagnostic approval by the United States FDA for AD.

The current research-use molecular markers for evaluation of AD are a combination of amyloid beta deposition (“A-beta”), neurofibrillary tangles known as pathologic tau 181 (p-tau 181), and neurodegeneration exemplified by the Neurofilament Light protein (known as NfL). These so-called ‘ATN’ biomarkers are sampled from blood.

While on the topic of testing there is a strong heritability component to AD. Genetic variation plays a substantial role in the development of AD, where twin studies have estimated the heritability of AD to be in the range of 58-79%. The FDA-approved CSF test requires a genetic test for the specific AD risk genes.

While testing CSF for Alzheimer’s Disease using the FDA-approved assay, lumbar puncture can cause side effects such as discomfort or headaches, and physicians can be averse to the procedure given its invasive nature and other restrictions.

From a sampling perspective having the option for minimally-invasive blood sampling is highly preferable, not only from a patient perspective but also for the important ability to obtain samples over time. For a disease that takes 8 to 10 years to develop, this capability to easily obtain specimens cannot be overstated.

A previous study (as a comparison to this one) was performed in Sweden of patients with mild cognitive impairment called BioFINDER[2]. This study used a subset of 270 Olink Target assays to investigate proteins in both CSF and plasma from A-beta negative and A-beta positive, cognitively normal individuals (n=415 and n=142), A-beta-negative and A-beta-positive, mild cognitively impaired individuals (n=50 and n=75), and A-beta positive, AD individuals (n=71). These measures support the statement in the current publication that the plasma proteins identified are “highly reproducible across protein-detection platforms, ethnic groups, and disease stages”.[1]

The results from the current study are shown in Figure 1B from the paper, where the volcano plot represents the top 5 up- and down-regulated proteins (the circles in the diagram are proportional to the p-value). 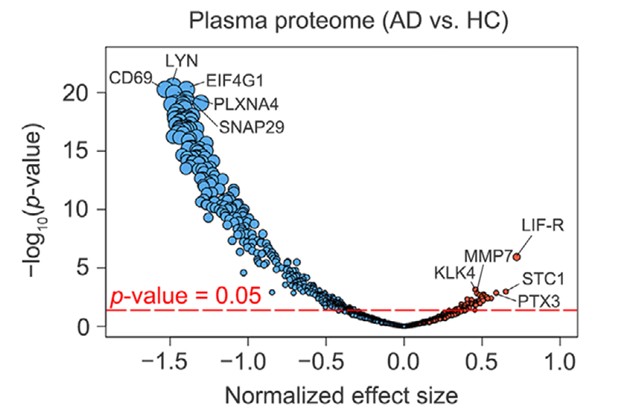 Figure 1: Volcano plot of 1160 proteins comparing up- and down-regulated proteins in Alzheimer’s Disease (AD) and Healthy Controls (HC) samples, with the size of the circle proportional to p-value and the top five proteins labeled

The 429 proteins identified as significant were then examined via co-expression network analysis or Genome Ontology analysis, where 19 distinct clusters of AD-associated plasma proteins were identified. The results of this analysis are illustrated in the following figure, with the name of each of the 19 hub proteins listed.

Figure 2: Identification of 19 hub proteins from the original 429 AD-associated plasma proteins through hierarchical clustering, each associated with a distinct biological process and unique cell-specific expression profile; from Figure 2B and 2C reference [1]

As the researchers had cognitive performance phenotype information on their sample set, they were able to show significant correlation of 7 of the 19 plasma hub proteins to cognitive health, which suggests these proteins could be used to measure progression of AD. Thus they give evidence that their 19 protein biomarker profile “not only accurately distinguishes patients with AD from HCs (healthy controls) but can also reflect AD-associated endophenotypes”.

Impressively, in an independent cohort (n=36 with AD, n=61 HC) they achieved very accurate AD classification (receiver-operator characteristic Area Under Curve (AUC) = 0.9690). When combined with the original discovery cohort, their overall results (n=142 with AD, n=135 HCs) showed an accurate classification of AD with 90.51% sensitivity and 90.91 specificity (AUC = 0.9594). Figure 3 below shows the receiver-operator characteristic (ROC) curve for the validation set. 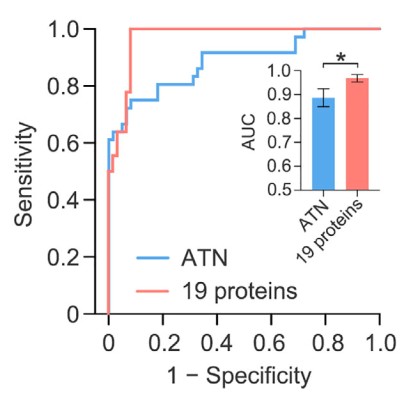 Figure 3: the receiver-operator characteristic (ROC) curve for the validation set.

The researchers then detail how their 19-protein biomarker profile can accurately track with other measures of cognitive impairment and brain physiology, including hippocampal volume and grey matter volume compared to designated AD severity.

Given the evidence for molecular endophenotyping of AD, the authors state measuring blood-based biomarkers is “a potential solution for both initial disease risk screening and long-term disease monitoring”. The ability of this biomarker set to differentiate AD from mild cognitive impairment, as well as the degree of cognitive decline, atrophy of the brain, and tau pathology is deemed worthy by the authors of a future longitudinal study to aid early prediction and early diagnosis of AD.

This exciting work will certainly be expanded upon, and recently the laboratory was highlighted in a Hong Kong televised visit by the President of China shown on national television[3]. Although in the Chinese language, around the 1’ 45” mark you can see the Olink Signature Q100 instrument in the background.

If you are working in the field of Alzheimer’s Disease research, and are attending the upcoming Alzheimer’s Association International Conference 31 July to 4 August 2022, be sure to stop by the Olink exhibit.

Neurology, Protein biomarkers, Proteomics
In the Relapsing-Remitting form of Multiple Sclerosis (RRMS), a single biomarker (soluble neurofilament light chain or sNfL) is identified as a biomarker for inflammatory activity in MS, but is limited in its ability to identify relapses. Through screening several hundred proteins using Olink® technology, three additional protein biomarkers have been identified as an improved relapse-specific signature to monitor disease activity in RRMS patients. Multiple sclerosis (MS) is a chronic autoimmune disease affecting the nervous system (brain and spinal cord) causing the degradation of myelin, the protective insulating layer around nerve fibers. By disrupting the normal signaling to and from the brain, unpredictable symptoms develop: numbness, fatigue and mood changes, all the way up to pain, paralysis and/or blindness. Nearly 1 million people in the United States and up to 2.8 million worldwide live with multiple sclerosis, which is the most common disabling disease of young adults. Current research indicates that a complex set of genetic and environmental factors play a role in its pathogenesis, including low levels of Vitamin D, infection with Epstein-Barr Virus and childhood obesity all implicated.

Clinical research, Proteomics
Dr. Krolewski and his team at the Harvard Medical School found 56 proteins to be significant in diabetic kidney disease patients. Potentially, these could serve as prognostic biomarkers for disease progression and treatment response. This is how adding proteomics to the methodologies elevated their research.

Clinical research, Neurology, Protein biomarkers
A simple search of the term ‘scourge of Alzheimer’s Disease’ brings up over half a million website hits. A major disease, about 15% of us that reach the age of 67 to 74, and 44% of those 75 to 84 will develop AD.

Drug discovery & development
High-throughput multiplexed proteomic technology is leading the way to the latest developments in pre-clinical disease analysis in drug discovery. The pharmaceutical industry is now increasing its efforts in the discovery of novel drug targets by using protein quantitative trait loci (pQTLs), which allows for a more confident inference of disease causality and associated protein regulation.

Oncology
An earlier Olink to Science blog post covered some amazing research that found that certain blood protein biomarkers have the potential to predict cancer up to 3 years before diagnosis. This may also be the case for lung cancer, as detailed in a recent study by Dagnino and her colleagues, where elevated levels of CDCP1 were detected in participants of a cohort who later developed the disease.

Oncology, Proteomics
'Ultimately, it is all about understanding and treating patients better in the future.'

Inflammation, Proteomics
Could food be used to fight chronic disease?

Clinical research, Proteomics
The following study illustrates how transcriptomics and proteomics complement one another to clarify the pathology of a complex, and little understood disease. Atopic dermatitis (AD) is the most common chronic skin condition affecting up to 20% of children and 7-10% of adults, depending on the population.

Protein biomarkers are crucial in early detection of cancer

Clinical research, Oncology, Protein biomarkers
A central premise of precision medicine is to identify biomarkers indicative of disease transitions early on. This is especially important in cancer where early treatment intervention could increase a patient’s chance of survival and reduce the probability of cancer recurrence.

Proteomics
Welcome to the first post of the all-new weekly Olink to Science! Our customer survey revealed that you would like to know more about the many publications, research, and other science happening at Olink, therefore this blog aims to do just that: keep you informed on the exciting science taking place with our technology.